If you’ve followed my SS&D book club posts, you will know that Epic Reads chooses a new book to read every month. Lo and behold: excitement! Because Susan Dennard’s Something Strange & Deadly was chosen for August, and Susan sprinkled in extra SS&D fun by hosting her own book club. Not only was A Darkness Strange & Lovely added, but an assortment of weekly prizes. As if that weren’t enough, there is an additional participatory prize of A Dawn Most Wicked or a cut scene from A Darkness Strange & Lovely–just for participating in one discussion. Pretty awesome, am I right? This week’s prizes are:

Well, today marks the end of the SS&D book club, and I’m sad to see it go. (But keep an eye out for its return next year!) Last week I turned lazy and missed the third discussion, so–just for the sake of it–I’ve lumped it in with this week’s question. I’d hate to ignore week three completely! Seeing as how today, Sunday, is the September 1st, I might’ve missed the deadline to enter for this week’s prizes. No matter, because the discussion questions alone pique my interest and, as a sucker for book discussions, I enjoyed answering them. To see my answers for weeks three and four, continue reading below the cut: 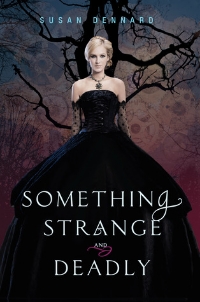 Eleanor finds herself more and more intrigued by (perhaps even attracted to) Daniel Sheridan, the inventor of the Spirit-Hunters. What is it about him that appeals to her? And vice versa, what do you think attracts Daniel to Eleanor?

Then there’s Clarence Wilcox, the seemingly perfect eligible bachelor. Why do you think Eleanor doesn’t like Clarence?

What draws Eleanor and Daniel to each other, I think, partly rests with how they defy each other’s prejudgments. When Eleanor first encounters Daniel, he is nothing but gruff, blunt, and rude, and although I feel Daniel is (more often than not) unmannerly, passion and mystery also skulk beneath his layers. Upon meeting her, Daniel instantly writes Eleanor off as a socialite—a dainty girl concerned with the glamorous upper-class life. Daniel feels that she is someone not worth his time, and it’s because his initial impression sits far below the kind of person Eleanor truly is that attracts him toward her.

Eleanor amuses and astounds both Daniel and Clarence by her differences. Unlike so many girls of her age and class, she is far less interested in parties and loathes to be treated like ‘a proper lady.’ This doesn’t mean she doesn’t expect gentlemanly behavior—as this is why Daniel ruffles her—but there is a part of her that wishes to be a man’s equal. She wants respect, and to mistake her as a feeble doll is an insult. As Daniel comes to understand Eleanor, he comes to value and ultimately care for her. He trusts Eleanor as she trusts him, and he acknowledges her strengths—even relying on her when necessary.

When it comes to Clarence, Eleanor shares none of this with him, least of all trust. What is more, Clarence symbolizes a lifestyle that she quarrels with. As a member of the upper class, Clarence holds certain obligations—from family and friends, appearances, and politics—that cause his life to turn stiff. Where Eleanor finds a release with Daniel, she finds a reminder of social duties in Clarence that Eleanor would rather leave behind. One must consider the circumstances of their relationship as well, for it begins under a pretense of polite friendliness. It’s Mrs. Fitt’s hope for Eleanor to marry a wealthy man like Clarence, if not Clarence himself, and as such, Eleanor’s behavior must be kept in-check.

With Daniel, Eleanor has the privilege to be herself. Not only that, but her true self is accepted by Daniel—as well as by Jie and Joseph. Eleanor can speak what is on her mind without fear of causing damage to her or her family’s reputation, without rebuke or being laughed at. She can get away without wearing corsets and, if she feels like, dressing in pants. The Spirit-Hunters don’t think any less of her for it. (If anything, they admire her strong spirit.) Clarence, by nature of his social class and upbringing, could not know or fully accept Eleanor for who she is.

How do you think this quote relates to the overall theme of Something Strange and Deadly? Do you think Eleanor behaves as if she has a choice at the start of the book? What about at the end of the book? And do other characters behave as if they have a choice or do some see themselves as victims of circumstance?

“But I didn’t have a choice!” How many times have we all heard this? It’s a phrase often used by people who, yes, did have a choice, but made the wrong one and/or felt that other choices were less desirable. I support Team Free Will, so whether it’s choosing to do nothing or take action, to shut up and obey orders or do what you believe is right, there is always a choice. We are the choices we make, so without free will, who are we? It’s a common theme in most of what we read, watch, and personally experience.

Life is not a dictator, but Circumstance limits people’s capabilities. For Eleanor, as a girl in the late 1800s, she is not only raised under the stern parenting of Mrs. Fitt, but under the belief that she must do what society expects—something which Jie challenges.  In the beginning, Eleanor’s goal remains straight-forward: save Elija. But afterward? She would return to her normal life, because in the custom that Eleanor is raised, she believes that she has no power over the direction of her own life. Given the time period, however, women didn’t have rights and opportunities—and this is what makes SS&D so wonderful not as a book but as a series.

Susan Dennard has built a story that occurs during the infancy of the women’s rights movement. Regardless of society’s restricted mentality and status quo, Susan’s characters prove resilient through their choices and the struggles they endure. And Eleanor? I love to see her grow. When I reviewed SS&D—when I’d first read it—I noted that, despite likable qualities, I never truly liked Eleanor until the end. Reflecting on her character development, I see why. Eleanor starts off as someone who is stuck inside a box. She feels confined, and yet she can’t imagine choosing to break free because she’s never known anything else except for what’s inside that box: the particular lifestyle she’s accustomed to.

The same can be said for other characters, such as Clarence—or even Elija. I must note that I don’t believe Elija is, in fact, accustomed to a certain livelihood. Naturally as a white, middle-class man, choices and opportunities are available to him. Elija’s vision, however, is clouded. He sees his family as a victim of circumstance and feels that his family was wronged. As such, he makes the terrible decision to exact revenge and gain power to carry out his goals. Although Elija may not feel as though he is restricted in his own freedom, he looks upon his family’s situation almost in black and white and—fuelled by emotion and knowledge—makes decisions accordingly.

Clarence, like Elija, is a man with access to choice, yet he remains rigid in his position. Without divulging spoilers, Clarence’s past—or more accurately, Clarence’s family’s past—comes to haunt him. I believe there are certain actions Clarence could have taken (had he been brave enough) that might’ve altered his fate. Instead, Clarence is struck with fear, sticks to secrecy, and seeks protection through others.

It’s Jie who shows Eleanor life beyond corsets and parties and marriage, and Eleanor yearns for it. Jie is a free spirit, however unconventional for the 1800s, as dressing and passing as a boy provides a sense of freedom. But more than that, Jie—unlike Eleanor—realizes that she has choices. Eleanor comes to realize this by the book’s end, and by doing so, she becomes a brave young woman willing to take risks. Eleanor grows from being that girl who follows orders to a girl who takes charge. From the start of the book, Eleanor illustrates that she’s a person with her own mind, yet it’s not until later that she uses it. She blossoms into her own independent person, and that’s why I love her.

Quote of the Month

"On these magic shores children at play are forever beaching their coracles. We too have been here; we can still hear the sound of the surf, though we shall land no more."